A classic Fenland village located just six miles east of Peterborough. The name Thorney means 'isle of thorns', which stands just 15ft above sea level in the most northerly part of the Fens.

Before the drainage of the Fens during the 18th-19th centuries, such villages were sparse and isolated within the marshes, sited on areas of naturally raised ground. Their names often include the element '-ey', denoting them as islands.

These isolated settlements were occupied by resourceful farmers, shepherds and fishers who are still known locally as 'Fen Tigers'. Due to the remote nature of these islands many became home to monastic communities. This was certainly true of Thorney, and part of its ancient abbey still survives to this day. The original 7th-c Saxon monastic foundation was destroyed by the Danes and rebuilt many times. Abandoned after the Dissolution of Henry VIII, it was used as a quarry for some of Cambridge's Colleges. The remains of the final Norman west front, with its impressive twin towers and turrets, now forms part of the current Church of St Mary and St Botolph.

The Dukes of Bedford, acquired Thorney's lands in the 19th-c. They were responsible for much of the drainage of the surrounding fens, turning it into rich farmland. Thorney then became a planned estate village providing good accommodation for the estate workers. Rows of gabled yellow brick terraces still stand along the main street, built by the Duke in the 1850s.

Opposite the abbey stands a group of fine Grade II stone buildings with mullion windows, built on behalf of the Bedford Estate around 1860-70. Originally a Post Office and forman's cottages, it is now a private dwelling. The panel over the central bay window displays the Duke's royal coat of arms.

Places of Interest to Visit in Thorney

A Saxon monastery was established in Thorney around 660 by Saxulf, who also founded a religious house at Medeshamstede (Peterborough). The site was totally destroyed by Danish invaders a century later. The monastery was re-established by St Ethelwold and given over to the Benedictine order. The Normans replaced the original wooden structures with a magnificent carved stone building in the early 12th-c. Following the Dissolution of 1539 it was left derelict, except for the abbey church, which was adopted by the villagers and is still in use to this day. Two fine Norman turrets remain, along with other parts dating back to 15th, 17th and 19th centuries. Nine canopied niches between the turrets display medieval statues.

The strange five story building in Tank Yard, visible from all around the village, is actually a water tank that once supplied the village. Below the water tank there was a chamber for processing sewage, making it a rather unhygienic combination in its day.

The hall at the front of the tower contains a local museum detailing the village's development since monastic times to present day. 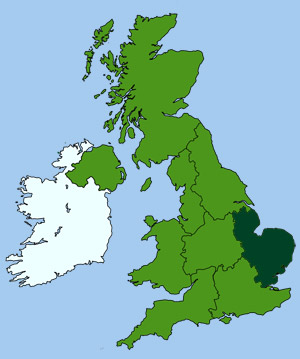 Towns and Villages in Cambridgeshire